Ginger is one of the most ancient spices worldwide. It has become well-known for its health benefits, which include its ability to boost bone health, strengthen the immune system, increase appetite, prevent various types of cancer, improve respiratory conditions, aid in digestion, eliminate arthritis symptoms, reduce excess gas, enhance sexual activity, and relieve pains related to menstrual disorders, nausea, and flu.

Ginger, also known as Zingiber Officinale, is inaccurately referred to as “ginger root”, although the edible section sold in the markets and used in dishes is actually the stem or the rhizome. In many places, it is mostly used in sweets and alcoholic beverages such as ginger beer and wine.

However, in Asian cultures, it is directly used by chopping it up or using its powder in traditional dishes and in soft drinks such as coffee and tea. Ginger’s irresistible fragrance is due to an essential oil in its composition that has been coveted and extracted by perfume makers since ancient times.

Not only is ginger known as an essence and a spice, it is known to be one of the oldest remedies known in herbal and aromatic traditional treatments, especially in China, India, and the Middle East. In China, it has been used for over 2,000 years for curing inflammation and diarrhea. Native to the Indo-Malaysian rain forests, ginger favors lush, moist, tropical soils for cultivation.

Its cultivation may have begun in southern Asia, but it has now spread to East Africa and the Caribbean. Ginger’s perennial plant grows bright red flowers that come in different shapes such as torch and honeycomb and are often used in seasonal festivals in the South Pacific for the decoration of stalls, houses, and even dresses.

Queen Elizabeth I of England, a fan of ginger herself, was the one to invent the gingerbread man in the 16th century, and it is now loved by millions of children (and adults) around the world. The gingerbread man was presented at a Royal ball, and several were made to resemble respected guests.

Today, ginger is on the FDA’s list of generally safe foods and is often used to mask the taste of bitter medicines such as cough syrups.

The various health benefits of this amazing root are given below:

Ginger is known to boost bone health and relieve joint pain. Two years ago, a study was conducted by the University of Miami that had several patients from different backgrounds and ages, who suffered from symptoms of osteoarthritis. The patients have then weaned away from anti-inflammatory and analgesic medications for cleansing purposes. A week later, they were split into two groups; one was put on a placebo and the other on ginger supplements. After six weeks of intensive dosage, a survey was conducted among the two groups. Both groups felt improvement, but 63% of the ginger group felt a notable pain reduction, while only half of the placebo group recorded notable improvement. The last test was for the patients to walk the distance of 50 feet, which proved to be far easier for the ginger group and their results showed twice as much improvement than the test subjects who were on placebos.

Ginger has a number of unique organic compounds which have actually been named gingerols, and these are powerful anti-inflammatory compounds, some of the most powerful that can be found in food. These gingerols have been directly associated with improvements in knee inflammation and associated pain, as well as suppressing the inflammatory compounds like cytokines and chemokines at the source before they can even begin to affect the body. Ginger represents both a preventative measure and a treatment for inflammation and its associated pain. 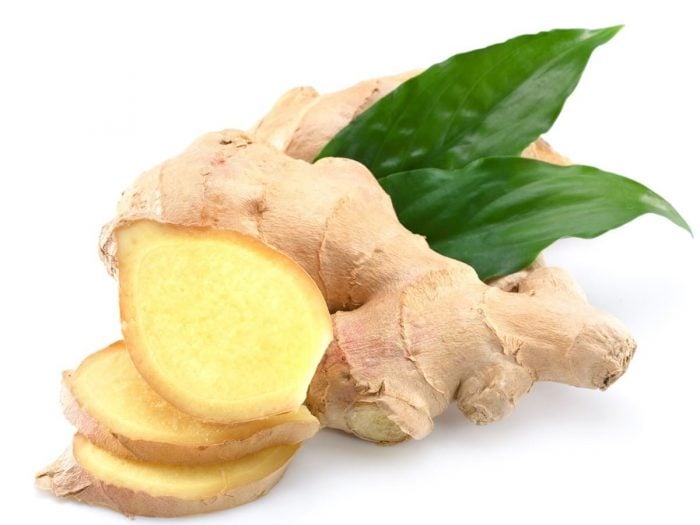 Ginger has been used since ancient times to cure diarrhea, and it was recently proven by researchers that ginger indeed helps, since it prevents stomach spasms and gas that contribute to and stimulate diarrhea. In China, its powder has been given to those with diarrhea for thousands of years; scientists have concluded that the ancient ways are indeed beneficial for this condition.

Ginger is a very strong carminative, meaning that it induces excess gas. Excess gas does much more than leaving you in an uncomfortable situation and it can be dangerous to your health. Too much gas built up in your system can force upwards and put pressure on delicate organs in the torso. A carminative like ginger forces the gas down and out in a healthy way and also prevents additional gas from building up again.

Ginger has been discovered to be a facilitator of the digestive process. The elevated sugar levels after a meal may cause the stomach to reduce its natural rate of emptying its contents. It helps in regulating high sugar levels that may disrupt digestion and soothe the stomach, thus, maintaining its regular rhythm. Along with that, ginger has a number of compounds that improve the absorption of nutrients and minerals from the food we eat. This is why ginger is also frequently used as an appetizer or an aperitif since it can stimulate the appetite while preparing the digestive system for an influx of food. Ginger is popular in Asian countries as an appetizer or raw menu item for precisely that reason.

One of the most exciting developments in the discussion of ginger and its impact on human health has been the positive correlation between the organic compounds in ginger and the prevention of cancer. Gingerols, the same compounds which give ginger its anti-inflammatory qualities, have also been shown to prevent carcinogenic activity in the colon that can lead to colorectal cancer. This is yet another way that ginger benefits the gastrointestinal system, making it such a perfect addition on the side of every meal. However, more recent studies have also connected these gingerols to apoptosis in ovarian cancer cells, thereby reducing tumors and the growth of cancerous cells, without harming the healthy cells around them.

Ginger is good at promoting sweating. Sweating not only cleans out the pores and allows your body to eliminate toxins through the liquid, but research has also shown that sweat includes a germ-fighting compound, named dermcidin. It has been positively connected to reduced bacterial and viral infections in a person who sweats regularly since it can create a sheen on the skin, which is a protective layer of previously unknown proteins!

A known aphrodisiac, ginger has been used for years to arouse desire and enhance sexual activity. Ginger’s scent has a unique allure that helps in establishing the sexual connection. Not to mention, this root also helps to increase blood circulation, hence blood flows more easily to the mid-section of the body, an important area for sexual performance! 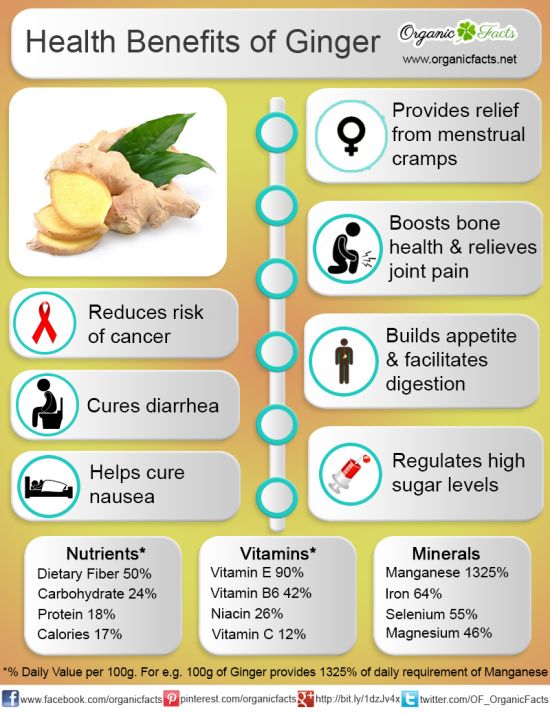 Cramps are the body’s way of alarming an individual to some type of danger or damage. In this case, prostaglandins, which are hormones that function as chemical messengers, are the key activators of symptoms such as cramps, pains, and fevers. Scientists believe that high levels of prostaglandins contribute to increased menstrual cramps. Ginger helps by reducing the levels of prostaglandins in the body, hence relieving the cramps.

Studies have concluded that ginger helps in curing nausea connected with pregnancy, motion sickness, and chemotherapy. Its quick absorption and rapid regulation of body functions cure nausea without the side effects of modern medications.

Ginger has been prescribed to fight illnesses and infection for all the ages. Its soothing effect helps to reduce the body’s emergency symptom responses to the damaged cells in the body. While the white cells work on patching the cells and defending against the illness, ginger acts a barrier to the high levels of prostaglandins that induce fever, headache, and cramps.

Other health benefits of ginger currently under research are its function in reducing heart diseases, arthritis, migraines, depression, and curing stress-related anxiety disorders.

Ginger may, at times, have side effects for those suffering from gallstones, since the herb incites the release of bile from the gallbladder. Therefore, if this sort of condition is expected or if you have a history of gallbladder conditions, it is best to consult a doctor before consuming ginger.